Linda established a Memory Walk (now the Walk to End Alzheimer’s) to raise Alzheimer’s awareness in her community and coordinated the walk for five years. At the 2015 Walk to End Alzheimer’s the Greater Missouri Chapter recognized her for 18 years of dedication and support. In 2017 the Greater Missouri Chapter dedicated a bench in her honor at the Highway Gardens on the Missouri State Fairgrounds to commemorate her 20th Walk. 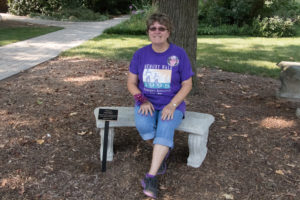 Writing: Linda is a freelance writer of both fiction and nonfiction. She is published in Chicken Soup for the Soul, Cup of Comfort, Well Versed, Echoes of the Ozarks, and other print and online publications. She was the author and editor of Alzheimer’s Anthology of Unconditional Love, an anthology of true Alzheimer’s stories. Linda was president of Columbia Chapter of the Missouri Writers Guild in 2009, and from 2012-2014 she served as vice-president and managing editor of their annual literary journal, Well Versed. She has won numerous prizes with her writing including Ozarks Writer League’s Best book of the Year for her book Early Onset Blog: Essays from an Online Journal and a Missouri Writers’ Guild Show Me Book Award for A Shaker of Margaritas: Hot Flash Mommas published by her company Mozark Press LLC. She has blogged since 2008 on her award-winning Early Onset Alzheimer’s blog.

Business Women: Between 2011 and 2013 Linda served as president of Sedalia Business Women, the largest Business Women of Missouri club in the state. She has been active in the organization for several years, chairing committees and served as an officer for six years. Linda established a scholarship fundraising program called the Red Purse Raffle which annually raised around $1,000. Her local club honored her with the Woman of the Year award in 2007-2008. She served as NW Regional Director for Business Women of Missouri (BWM). In 2015, she was elected vice-president of the BWM Foundation Board.